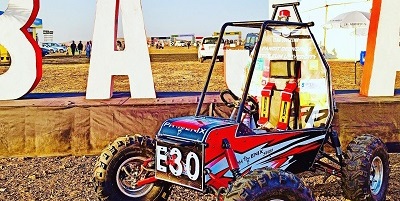 To be recognized globally for excellence in education, applied research and training in the field of Automobile Engineering through innovation of high Social impact and to prepare youth for tomorrow.

Objectives of Automobile engineering department are: Graduate will

Shell Eco-marathon is a unique global programme, for science, technology, and engineering students to design and build ultra-energy-efficient cars, and then take them out on the track in competition. Since 1985, the competition has challenged student teams across the globe to design, build and drive the most energy-efficient cars which have resulted in students coming up with an entirely new breed of ‘Hyper-Efficient’ cars. It is one of the world’s leading energy efficiency competitions which takes place in three different continents of the world namely, Asia, America, and Europe.

The Shell Eco-Marathon Challenger events are held in 7 countries of the Eurasian continent which include India, China, Brazil, South Africa, Turkey, France, and The Netherlands.

Team Kaizen from PDEU has been consistently participating in the Shell Eco-Marathon competition from the year 2015. The team has come a long way in building their prototype vehicles and improvising upon it year after year.

This year, the team participated in the #MakeTheFuture Challenger event held under the flagship of the Shell Eco-Marathon in Bangalore from 19th to 22nd November 2019 and drove their prototype on the first-ever purpose-built track by Shell at Shell Technology Centre.

Team Kaizen with their prototype car ‘Nakshatra’ ranked 2nd amongst teams from all over India by achieving an efficiency of 198.4 km/kWh in the Battery-Electric Prototype category.

The team comprises of 29 undergraduate students from Mechanical as well as Electrical engineering discipline, who have worked endlessly in designing, manufacturing and testing the battery-electric prototype vehicle, finally giving it an amazing aesthetic aerodynamic design, reducing its weight, enhancing its electrical circuitry sophistication and adding kilometres in their efficiency parameters.

The team works under the zealous and indispensable guidance of Dr. Amit V. Sant and Dr. Pankaj Sahlot. 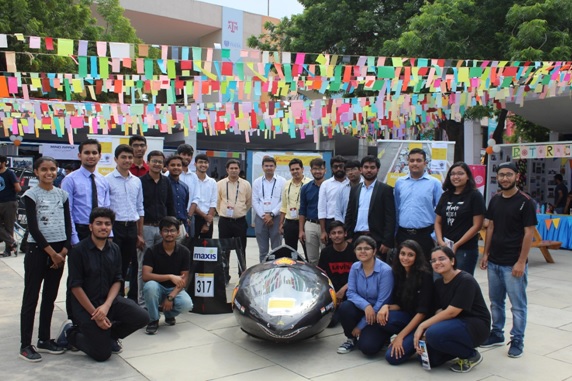 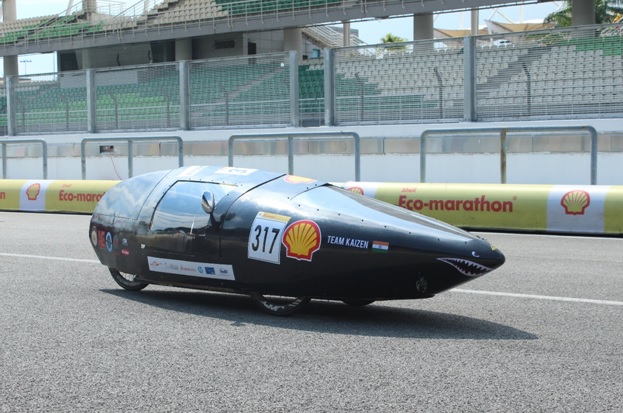 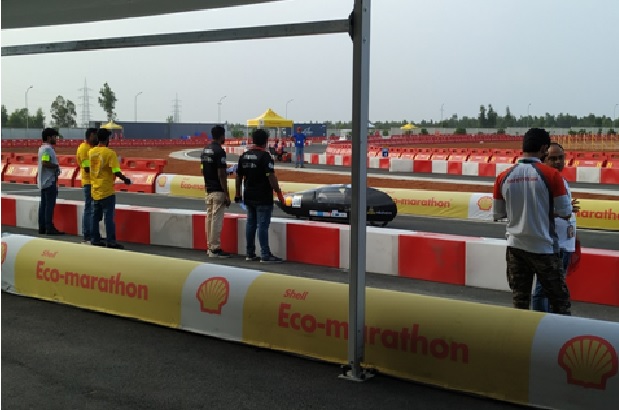 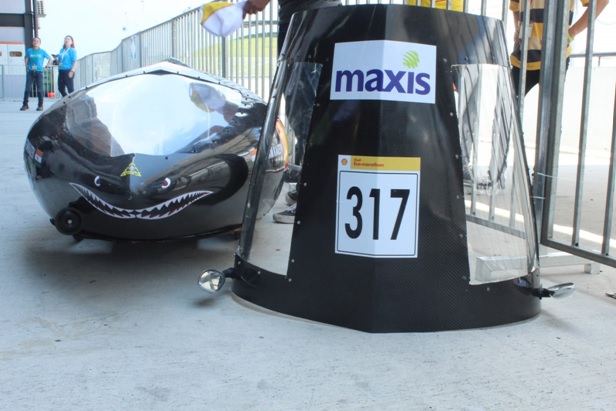 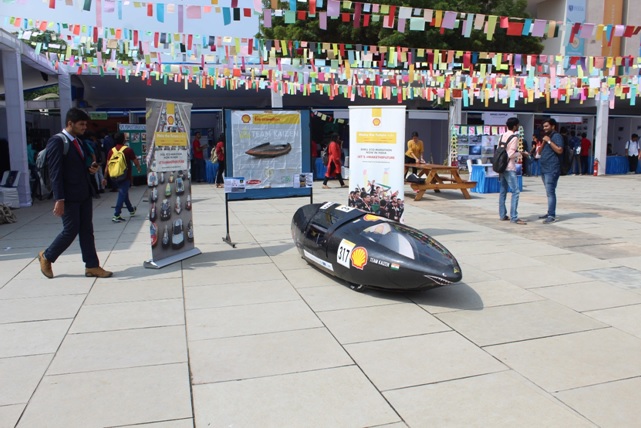 M-BAJA is an intercollegiate design competition started in 2007 sponsored by Mahindra & Mahindra and SAEINDIA and hosted by NATRiP, Indore and IIT Ropar. The main objective of the BAJASAEINDIA is to make engineering students’ design and fabricate a prototype of a rugged single seated off-road vehicle intended for sale to a non-professional, weekend off-road enthusiast considering the terrain across INDIA. The evaluation process for the BAJA SAEINDIA is a twofold process and students have to clear the Virtual Baja preliminary round before they start manufacturing their buggy’s for the main events.

The teams are judged on six main parameters in the Virtual BAJA event which are – their knowledge of the rule book, the design of the vehicle, the project plan, the design methodology and the design evaluation plan.

The evaluation process in the main event is a different ball game altogether and the students finally got to showcase their finished buggy’s to the judges. In the static tests the buggy’s are evaluation on various factors such as cost, aesthetics and the quality of the fabrication. There are also many dynamic tests such as acceleration. Braking, maneuverability over all terrain and a hill climb test. But none of these tests are more gruelling than the endurance race where the drivers and buggy’s are pushed to their limits till a winner emerges.

Team CZAR
The team has been participating in the competition since the past six years and was the first team from Gujarat to break into Top 10 teams in the nation, which was then followed by the team being ranked 1st in the Virtual BAJA from amongst 400 teams from around the nation the past season. The team participated in the event for the seventh time this year, and their buggy was named as the CZR04. A total of 22 students took part in the team and worked for a year to design, manufacture and test the ATV under the mentorship of Mr. Rahul Deharkar and Dr. Vivek Patel.

The team was able to compete in all the dynamic events which resulted in the team finishing 3rd in Gujarat, 16th in the Suspension and Traction event, 18th in Rock Crawl event and 46th Overall in the nation from amongst 120 teams present at the event. Also, the team secured 25th position in the cost presentation. 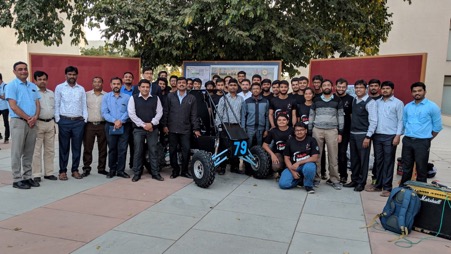 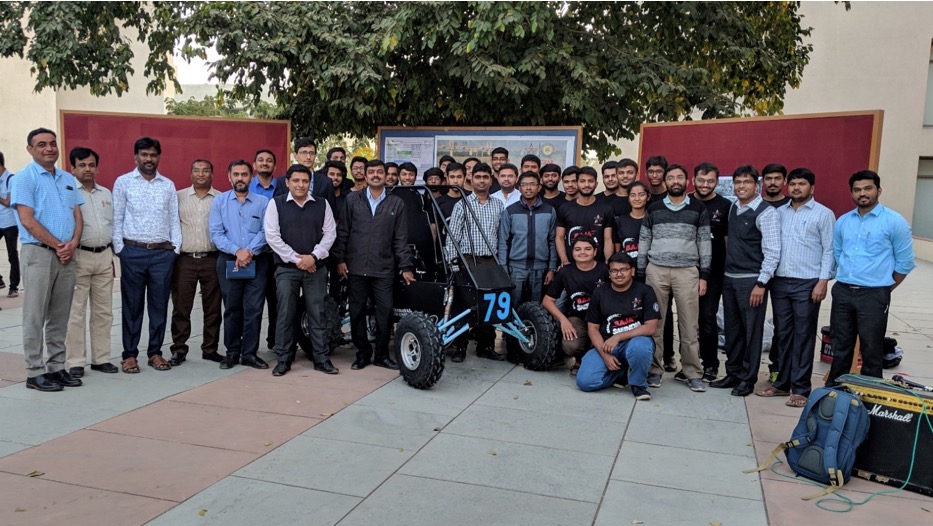 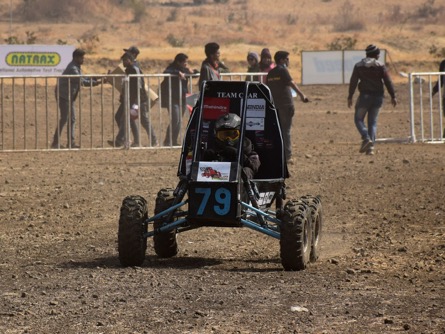 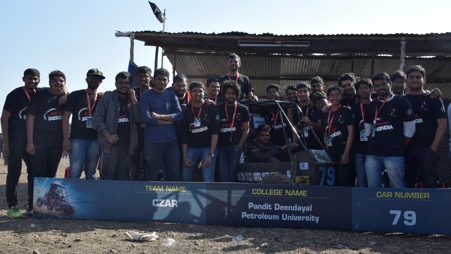 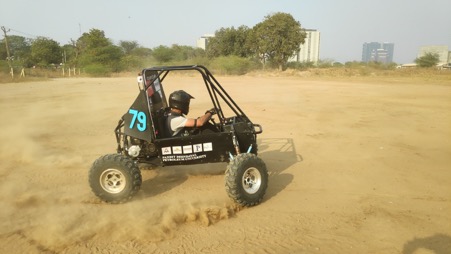 E-BAJA is an intercollegiate design competition. Team of 25 students need to design and build electric powered ATV that has Traction motor of 48V with fully automatic transmission having gear ratio of 12 and 160 Ah of battery pack. Considering the vision and road-map of automobile 2020, eBAJA SAEINDIA is a step ahead in gradual liberalization of the automobile sector in India. It is the strong approach towards shaping the future direction of auto industry so as to promote and achieve sustainable growth. This was a new initiative introduced in 2014 on the counsel of former President of India, APJ Abdul Kalam, in order to promote greener mobility. All entries in this category run on rechargeable lithium ion batteries. While there isn’t any specification on where students must source their powertrains from for this competition, most teams usually use a Mahindra Reva (now Mahindra Electric) engine for their cars. eBAJA is amongst the most significant inventive in India. It is the first of its kind competition throughout the world. Taking up the initiative Mahindra Reva is providing strong upfront and proactive support to all teams in means of providing power train kits and onsite technical assistance. They will provide the kit to the teams with some subsidized rates.

Team Sovereign
PDEU participated in the E BAJA event for the second time in year 2019. This team was comprised of mechanical and electrical undergraduate students. A total of 24 students took part in the team and worked for a year to design, manufacture and test the electrical ATV. Mr Rahul Deharkar and Mr. Ravi Botta were the advisors for the team. 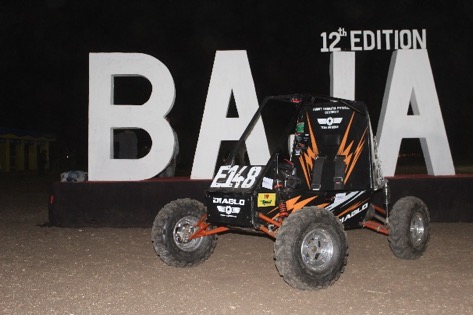 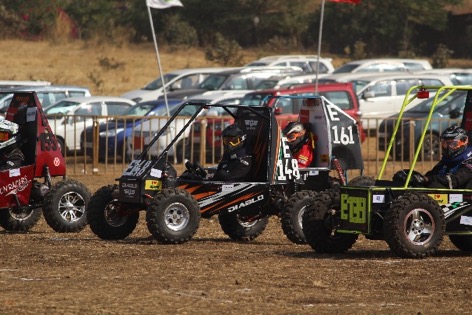 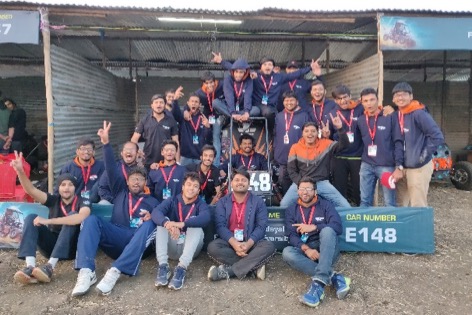 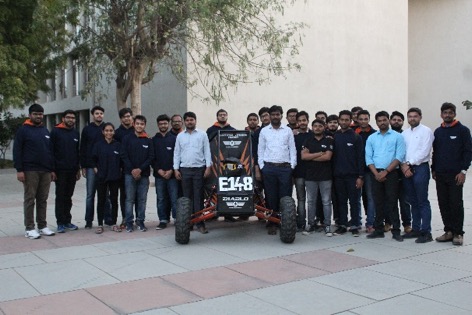 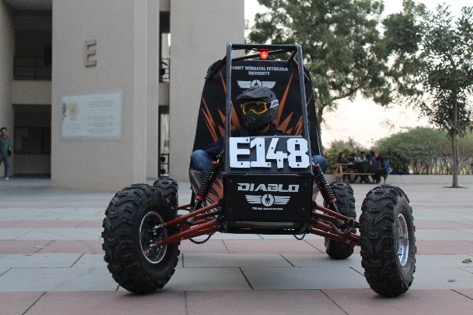 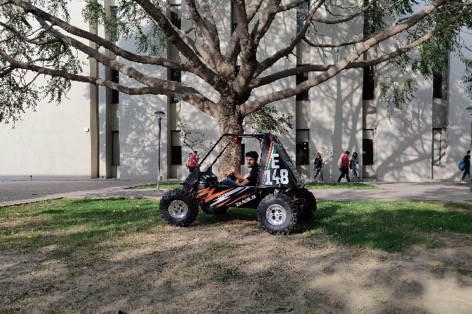 Brief Profile: Dr. Oza has a B.E. in Mechatronics Engineering from Sardar Patel University, Gujarat. He obtained his Masters in Control Systems Engineering from The University of Sheffield, UK and his Ph.D. degree in Electronics from The University of Kent, UK. He followed his PhD with a postdoctoral fellowship at Kent for research in robust and nonlinear control. He received scholarships for his PhD and postdoctoral positions from the Engineering and Physical Science Research Council (EPSRC), UK. His professional engineering experience ranges from control design in diverse applications in textile and packaging machines to detailed engineering review of instrumentation in petrochemical refining. Dr. Oza has significant research experience in the area of Dynamics and Control. He has published articles in reputed international journals published by IEEE, SIAM, AIAA and IMA. His papers have also been published in reputed international conferences such as IEEE-ICRA (Robotics and Automation) and IEEE-CDC (Control and Decision). During his tenure in academia, Harshal has secured funding in the form of Early Career Research Award from DST. He has developed several UG labs and taught multidisciplinary courses. Dr. Oza is an active member of IEEE, IET and ASME. He routinely reviews papers submitted in journals of IEEE, Elsevier and Wiley.

Some Automobile Companies in Gujarat 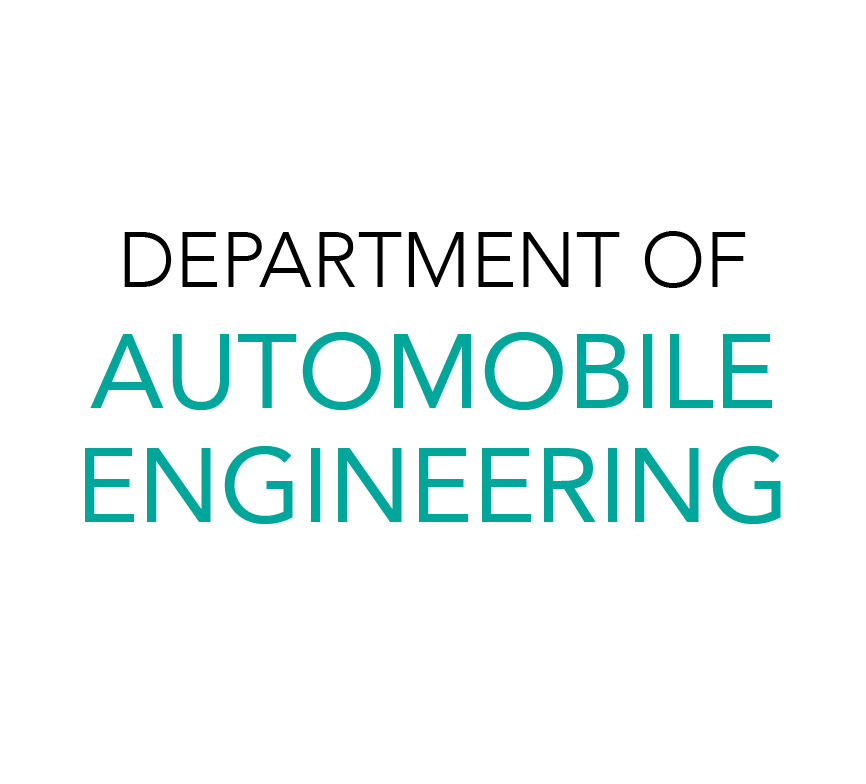